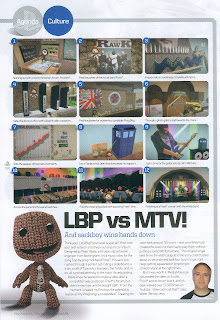 Well, well...I'm published! :o)
The good people at Future Publishing's "Official Playstation Magazine" have put together an article on my video and it is in the May edition...hitting the newstands on Tuesday next week.
Subscribers have been getting their copies early and a few new comments have popped up on YouTube referring to the article.
The article is on page 32 and is tagged as being a "culture" item (hopefully as in "Arts" rather than as in "petri-dish"!). I am, naturally, chuffed to smithereens by this, not least because of the small amount of additional exposure the band will get from it.
There have been a few very positive reactions that I think have actually resulted in people looking into the band and liking what they see. Of course, whether or not this results in any revenue for the guys is in the lap of the torrents but one can only try.
I think this probably means I have just about milked the video as far as it can be milked. The only other thing I might do is drop a line to the Classic Rock Magazine guys (who are also in Future Publishing). They might see a "nut-job-fan" angle in it, especially if the slightly whacky nature of Frost*ie goings-on appeals to their "aren't prog fans weird" agenda (if they have such a thing).
Apart from that, I guess I'll have to think about making something else....bigger, better, whackier....
Posted by Pedro at 16:33 No comments: